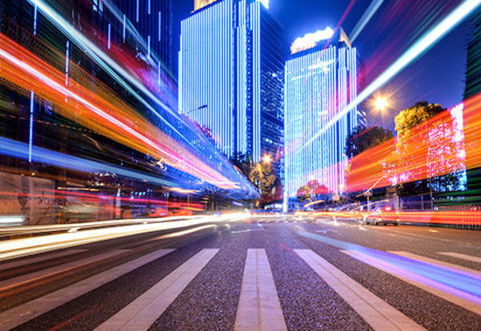 Will local councils see the light on LED technology?

Visitors to the Commonwealth Games in Glasgow this summer will find a city transformed by the £0.5bn poured into new sporting venues and beefing up the city's infrastructure.

But there is an even more fundamental transformation under way in Scotland's biggest city. By next summer, it will be firmly on track to becoming a world-leading "smart" city, having won £25m from the government's Technology Strategy Board to show how a city can use cutting-edge digital and wireless technology to provide services such as roads, security and lighting to its citizens more efficiently, while cutting CO2 emissions.

And lighting is one of three key areas where Glasgow is trying to shine as a smart city. In November, the council announced that by next summer the sulphurous orange glow of 10,000 sodium street lights will be replaced with the crisp white light of light-emitting diodes (LEDs) and compact fluorescent bulbs, cutting the city's energy and maintenance bills.

But the really smart bit is that Glasgow will test the way LED lights, unlike their technological predecessors, can be equipped with digital sensors allowing them to be controlled remotely, and to respond to changes in the local environment, such as an increase in traffic. Such intelligent controls can push the average energy savings with LED lighting from 50% to 70%, according to the European commission.

Yet a recent roundtable discussion on the future of lighting in cities – hosted by the Guardian in association with GE Lighting – heard that only 10% of new public streetlights are LED based. So what is preventing LEDs from being installed in every house, skyscraper and city street? How do you flick the switch on the LED revolution?

Ben Ferrari, director of corporate relationships for the Climate Group, a not-for-profit organisation working globally with governments and business on the green economy, told the workshop that LED could be a critical weapon against climate change, as lighting accounts for almost 20% of global electricity use. At the recent UN climate conference in Warsaw, the Climate Group renewed its call for all new public lighting globally to be LED by 2020.

"If we are facing peak emissions this decade, scale for LED isn't just desirable," Ferrari said. "We have to get where we are going, and we have to get there quickly."