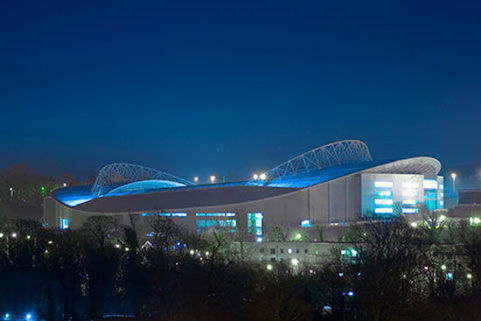 Football is not only one of the biggest sports in the UK, but it is also a huge business sector. Loved by millions, sometimes the entertainment the popular sport offers can negatively affect the local community.

This is the case at the recently developed AMEX stadium located in Falmer, just outside Brighton; and home to the Brighton and Hove Albion team. Built-in 2008 on the downs outside Brighton, the AMEX was designed specifically to avoid heavy town-centre traffic flow and keep a low-level of noise disturbance. And while these two byproducts can be disputed in success level, another issue has arisen — light pollution.

For the past three years, the club has been using a significant amount of lighting and heating fixtures to promote grass growth in the winter months, abiding by the premier league pitch standards.

Due to all this use of lighting, an iridescent glow of unnatural light has spilt into the night skies surrounding the seaside town and is causing a big concern among the residents. As well as the visually harmful effects, the lights have also been linked to the deaths of insects that are vital to our eco-system.

Nearly 7,000 people have signed a petition which they intend to send to the club for a response. Steve Geliot, a local artist, complained last year and received a generous offer from the club last year, but the club have revamped their lighting fixtures further since the complaint.

“I have been becoming increasingly aware and upset by it over three years but last year I particularly noticed it and I did contact the club. I got a courteous response but I can see that it’s as bright as ever this year. What has changed this year is the science. And people like me are saying this isn’t right, and I’m not putting up with it. I completely get that there’s a lot of loyalty to football and to the club and I’m not anti the club or football. I don’t think it’s that difficult to fix it; it just needs reflective panels so it’s lighting up the pitch and not the sky.”

A spokesman for Brighton and Hove Albion said: “Like most businesses, the football club must balance its concern for, and responsibility to help protect, the environment with our need to practically run our business as a Premier League football club watched by tens of millions of people across the world.