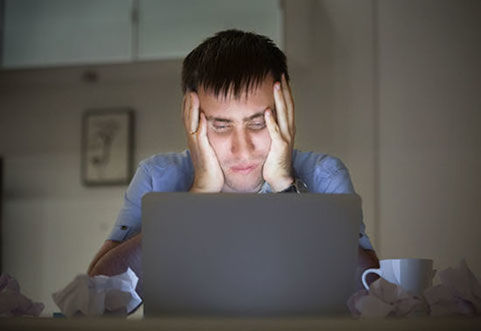 Got the blues too bad to sleep?

It has long been known that our circadian rhythms are shaped by natural light, and that the wrong type of artificial light can have a detrimental effect on our waking and sleeping patterns. The blue light emitted by screens in particular has been linked to sleep disruption, and display correcting programmes such f.lux and Twilight have been available to pc and android users for some time. Apple’s latest iOS 9.3 now comes with support for a feature called Night Shift for use on 64-bit iPhones. But are these various solutions up to task?

Despite recent advances in technology, the current gamut of blue-light reducing software relies on changing the visual appearance of a display screen and has its limitations. Dr Raymond Soniera, reviewing for respected independent evaluator DisplayMate, estimates that Night Shift reduces blue light emissions to a maximum 42% of normal. But to achieve these levels, the user is left with a distinctly yellow screen.

Dr Soniera recognises that “Apple’s introduction of Night Shift is a major industry-wide and worldwide development in getting this important issue recognized and appreciated by consumers, manufacturers and researchers”. But it would seem that, until display technology catches up, we will simply have to deal with altered visual appearances if we want to sleep at night.